History of Highland Cattle and the Kyloe of the Western Isles.

The Bos primigenius migrated to north between the Ice Ages circa 11 500 years ago.  When Neolithic and Bronze Age people colonized Scotland about 5000 years ago, they brought with them domesticated Celtic shorthorns or long-fronted oxen (Bos longifrons). Some sources believe there was cross breeding and the Bos Longifrons was responsible for long horns, with the 'Bos Primigenius' proving long hairy looks. Cattle from the Islands (Kyloes) were usually black, hardy and small. Only later the in the 19th century, were red/brown variants exported from Glen Lyon and their gene proved to be dominant and is now the color of most of the breed in various shades. The Kyloes ability to forage and graze for plants which many other cattle avoid enabled them to survive in steep mountain areas and their hairy coat insulated them during the cold winters. 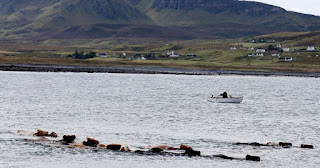 Highland Cattle were able to produce beef from inhospitable land, and by the 5th century, domesticated highland cattle were the main source of meat and milk for "Crofters," and their hide hair was used to spin yarn. They became vital to the survival of the Highlanders who lived under their Clan Chiefs as communities and later as Tenants.  The cattle were driven long distances, on foot, South and East to where the denser human populations lay and sold for food. 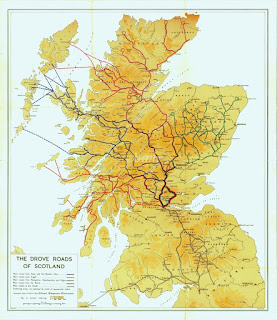 At first, during the earlier centuries, the livestock business was handled by Monks, but gradually as the worth of cattle as symbols of wealth became apparent the Droving Trade was taken over by warring clans. Over centuries, trade routes or drove roads from the Highlands were established through very hostile territory. The Crown realised they could raise revenue by establishing fairs or trysts for traders and drovers to sell their goods in market towns like Muir of Ord, Crieff, Alyth, Brechin, Dumbarton, and Dumfries. By the 17th century bi-annual Trysts were held at Crieff and Falkirk. Cattle had to swim across seas and lochs before being driven along the ancient and treacherous drove roads to the market towns. On average the cattle travelled between ten and fifteen miles a day over the roughest terrain.  The lucrative trade was at its height from 1760 to 1820, with something like 150,000 cattle per annum taken across the highland drove roads, but by the end of the 19th century, this was at an end. 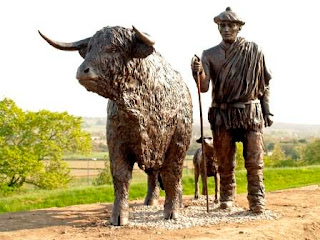